Protection of the underwater cultural heritage

national perspectives in light of the UNESCO convention 2001 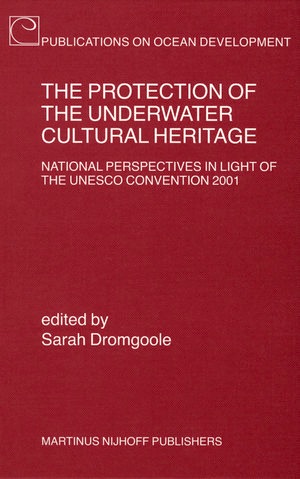 Protection of the underwater cultural heritage

national perspectives in light of the UNESCO convention 2001

Descrizione Dettagli
The legal protection of the underwater cultural heritage is a field in which there is growing international interest. Shipwrecks and other underwater cultural remains in every maritime zone are threatened both by activities directed at' them, such as treasure hunting, and by activities incidentally affecting' them, such as mineral exploration and exploitation, pipeline and cable-laying, dredging, and fishing. Since the first edition of this collection (1999), the urgent need for an international legal framework to regulate these activities has been formally recognised by the adoption in 2001 of the UNESCO Convention on the Protection of the Underwater Cultural Heritage. While the prospects for this Convention remain uncertain, it will undoubtedly have a profound influence on national laws and practice in this field. This volume examines the present state of law, policy & practice in 16 different jurisdictions around the world in light of the 2001 Convention.
Autore
Dromgoole Sarah
Ean / Isbn
978900415273
Pagine
424
Data pubblicazione
30/06/2006