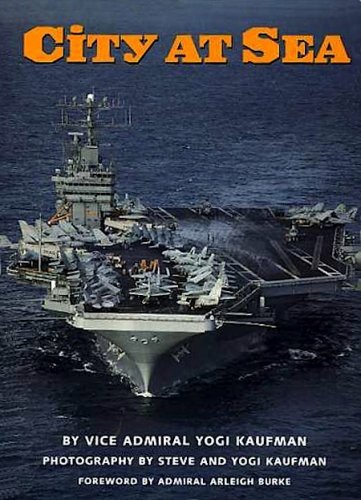 Descrizione Dettagli
Home to some 5,500 sailors, the modern aircraft carrier - truly a self-contained city - distills more than 400,000 gallons of water daily, serves more than 18,000 meals a day, and has over 2,000 telephones and 30,000 light fixtures. Weighing some 100,000 tons, these $3 to $4 billion ships have flight decks larger than four acres, eighty-plus planes, and towers reaching twenty stories into the sky. Their awe-inspiring presence at sea is respected around the world. This stunning photographic tribute realistically captures the life of a carrier under way, from captain to seaman, tower to berth. Intent on getting the full picture, Adm. Yogi Kaufman and his son, Steve - professional photographers and authors with several successful books to their credit - spent time on seven U.S. carriers. Not satisfied with focusing solely on the air operations, the Kaufmans have produced a total portrait that highlights the remarkable performances of a large supporting cast, the men and women behind the pilots and ship's officers who make the carrier go. The camera captures the vivid colors worn by the flight deck crews, stops the action of flaming jet afterburners in aircraft launches and landings, and visits the spaces below decks to depict "the butcher, the baker, the candlestick maker," as Admiral Burke calls them in the foreword. This thrust sets the book apart from others on the subject that address only the most glamorous aspects of naval aviation.
Autore
Kaufman Yogi, Kaufman Steve
Ean / Isbn
978155750457
Pagine
168
Data pubblicazione
09/09/1995