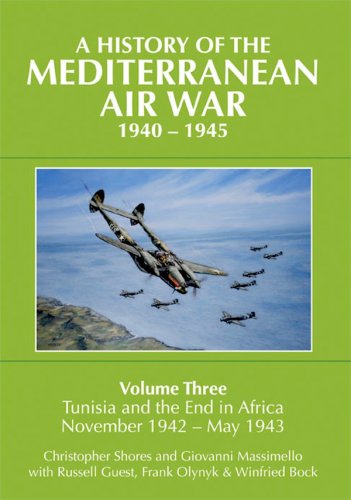 Descrizione Dettagli
The third volume in this series returns to November 1942 to explain the background to the first major Anglo-American venture – Operation Torch, the invasion of French North Africa. It deals with the fratricidal combats which followed the initial landings in Morocco and Algeria for several days. It then considers the efforts made – unsuccessfully in the event – to reach northern Tunisia before the Germans and Italians could get there to forestall the possibility of an attack from the west on the rear of the Afrika Korps forces, then beginning their retreat from El Alamein. The six months of hard fighting which followed as the Allies built up the strength of their joint air forces and gradually wrested control of the skies from the Axis, are covered in detail. Then from 1 April 1943 the continuing story of the Western Desert Air Force is told from the point at which Volume 2 ended, as it advanced from the east to join hands with the units in the west. Now also described are the arrivals over the front of American pilots and crew, the P-38 Lightning, the Spitfire IX and the B-17 Flying Fortress – and of the much-feared Focke-Wulf FW 190. The aerial activities over Tunisia became one of the focal turning points of World War II, yet this is frequently overlooked by historians. As before, the air-sea activities, the reconnaissance flights and the growing day and night bomber offensives form a major part of this volume. The mastery of the whole African coastline of the southern Mediterranean by the Allies prepared the way for the invasions of the European territories on the other side of this critical sea during 1943, which will be dealt with in Volume 4.
Autore
Shores Christopher, Massimello Giovanni, Guest Russell, Olynyk Frank, Bock W.
Ean / Isbn
978191069000
Pagine
680
Data pubblicazione
20/09/2021