What really sank the Titanic 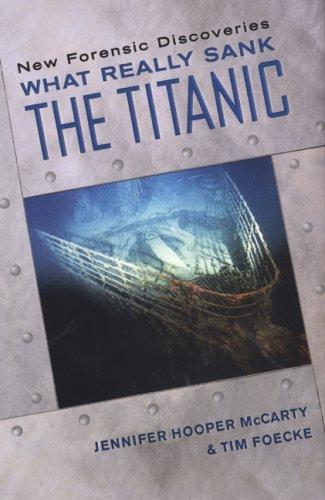 What really sank the Titanic

Descrizione Dettagli
On the starry night of April 14, 1912, at the dawn of a century charged with human ingenuity and hope, the largest and most advanced passenger ship in the world struck an iceberg and sank to the bottom of the frigid North Atlantic. In the decades that followed, despite numerous official inquiries and the eventual discovery of the wreck itself, key questions have gone unanswered: Why did the double-bottomed, 46,000-ton RMS Titanic, built above and beyond the most exacting specifications, sink in less than three hours? Was the iceberg alone responsible for the tragedy? Or did other factors contribute to the collision's deadly toll? A conclusive explanation has not been given--until now. With the same methodology used by forensic scientists in crime-scene investigations, researchers Jennifer Hooper McCarty and Tim Foecke applied new tools to the century-old mystery. By analyzing step by step how the ship was designed and constructed, what vulnerabilities were overlooked, and how this marvel of modern engineering may have been a disaster waiting to happen, they build a compelling new scenario. We are vividly taken into a bygone era, when luxury ocean travel and ruthless business competition fueled ever mightier ship construction projects built by Belfast shipyard workers, some mere children, laboring in unsafe, exhausting conditions. With Britain, the shipbuilders, and an entire industry caught up in a mad dash to build the greatest vessel ever, shocking lapses went unnoticed. Using modern microscopic techniques, the authors reveal those failures and show how they doomed the lives of at least 1,500 of the Titanic's passengers and crew. Grippingly written, What Really Sank the Titanic is illustrated with fascinating period photographs and modern scientific evidence. It includes little-known Titanic facts and lore, colorful portraits of the ship's designers, builders, and crew, eyewitness accounts, and a dramatic timeline of the ship's last hours. In an age when forensics can catch killers, this book does what no other book has before: fingers the culprit in one of the greatest tragedies ever.
Autore
Hooper McCarty - Foecke
Ean / Isbn
978080652895
Pagine
256
Data pubblicazione
01/03/2008